The Fake Prince is an intriguing ‘green-collar’ crime novel. Ecofiction with a comic twist.

It reveals the details of how an eccentric thief pulled off the biggest fraud in the history of the state of Queensland, Australia. Much of the money is still missing.

Ariki Will Summers has a fantasy-prone personality. From certain childhood experiences he comes to believe that he is a member of the Tahitian royal family. As a young adult working in the Queensland public service he uses this invented  identity as a ‘disguise in public’ while he steals vast sums of money from his employer, a  department with a  record of mishaps. Splurging  his wealth, the fake prince  becomes a  colourful celebrity. At the height of success, he is inspired by the environmental protection movement to donate his money to save the Earth for future generations.  But is it justifiable to steal from the state to support worthy causes?

Loosely based on actual events, The Fake Prince is an upbeat 21st-century fable from Australia’s New World City – Brisbane – that will keep you entertained but often furious at the charming swindler as you follow Ariki’s journey from poverty to wealth, social celebrity, consumer addict, and lover. When he discovers more important needs than his own is it redemption or another fantasy?

I loved this novel…an intriguing conman whose story is set against the background of Brisbane city with its distinctive landmarks and the devastating 2011 floods. The story is enlivened by the moral questions raised by using money defrauded from the public purse to promote worthy causes.  Drew Hutton, founder of the Queensland Greens party, President of Lock the Gate Alliance, Australian Environmentalist of the year (2013).

Online purchase only available inside Australia.

Important: When you purchase with your Paypal account, your shipping details will automatically be provided to us

At your request, you can get your copy signed by the author and a personal note to you (or your gift recipient).

If you wish to purchase a copy from outside Australia, contact us via email  at jpsfiction@gmail.com, providing your country/city location  and we will reply with purchase costs, including shipping to your location, and bank deposit arrangements.

The e-book of The Fake Prince is available for immediate international purchase  on  Kobo  (Aus$5.99) and Amazon/Kindle (Australia) (Aus$5.46). Download it today!

Buy from a Bookshop in S.E. Qld: The Fake Prince is  available at the following Queensland book shops: 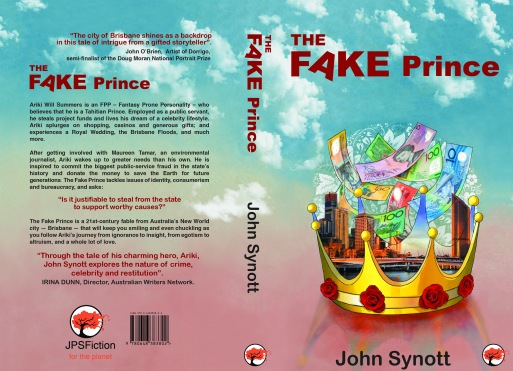 Praise for The Fake Prince and John Synott

The city of Brisbane shines as a backdrop in this tale of intrigue from a gifted storyteller. John O’Brien, Artist of Dorrigo, semi-finalist of the Doug Moran National Portrait Prize.

The Fake Prince hides in plain sight as he steals the pearls of fortune, celebrity and good works. The last pearl is the paradox of his own honour. You should steal a few hours yourself for this tale of a modern swindler. Janelle Christofis, Arts Producer.

A  blend of fact and fiction that disdains the cliches of most white-collar crime novels… the author’s portrayal of a conman who employs his high EQ and understanding of bureaucratic fault lines to exploit the system without fully abandoning his conscience is nicely realized.  Roger Vickery, short story writer, poet, playwright and lawyer.

I immediately found it fascinating and very well written. Can’t wait to get back and read more. Your writing is so personal and the environment you create for your characters almost familiar. Congratulations, John – this will be a winner. Di Watson, Editor/Publisher, Brisbane Circle magazine.

A leak in the Treasury of Queensland finances a fabulist and his guileless enablers.  But of course, it couldn’t happen, could it? Gary Malinas, philosopher.

Share the rise of a charming conman as he pilfers Health Department funds to support his lavish lifestyle. Most of us would be envious of what he does with heisted money, but there’s always a price to pay. What a great read!  Don Alexander,  formerly academic from the University of Queensland,  and editorial collective of Social Alternatives.

A combo of the fantasy, fairy-tale, and a sense of great fun amongst the serious issues it covers; what John Synott’s novel is advocating is so very topical.  Pym Schaare,  author of Since Then: Poems and Commentary, and Fit of Passion: The Poetry of Performance.